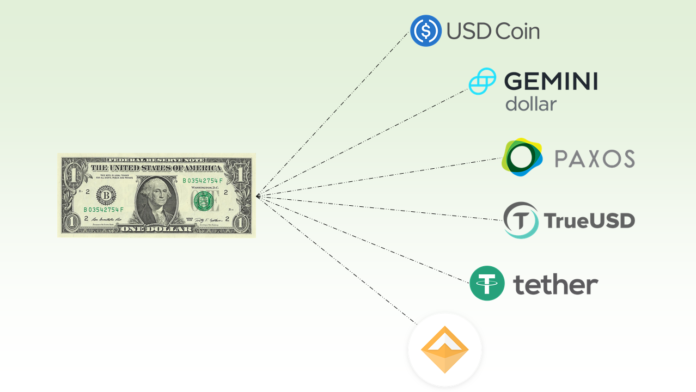 The first major stablecoin was Tether USDT, a ground-breaking innovation of its time, which is a dollar-pegged cryptocurrency. This changed the game of cryptocurrency, as it allowed for a new strategy of holding USDT when one anticipates a price drop without having to cash out into fiat (government-issued money).

This stablecoin took on the bad habits of its cousin, the Dollar; fractional reserves (at best), due to its lack of auditors and criticisms of involvement in market manipulation. There were also concerns over not being able to provide the liquidity, which lead to a discount in price of USDT and price differences at Bitfinex. This was at a time when everyone thought they were going to close down.

Other stablecoins pegged to the dollar have been created and are now being used, some of the main dollar-pegged digital assets include TrueUSD, Gemini Dollar and USDCoin.

Fiat Collateralized: Backed by fiat currency, held in a vault and audited independently. The tethered stablecoin represent the base fiat currency.

Crypto Collateralized: The same idea here, but the stablecoin is backed by a selection of different crypto assets.

Non Collateralized: These can be a bit more complex, two different types of coins, one being the pegged stable coin and the other being a volatile asset. An algorithm can use arbitrage to stabilize the stablecoin price.

What are stablecoins used for?

As mentioned, one of the main uses for stablecoins is to move between a position in cryptocurrency, or to get out of that position and wait on the sidelines, without having to cash out into real fiat money if you anticipate lower prices.

Taking into consideration the macroeconomic trends, one of the biggest uses for stablecoins is for people in developing countries with a bleak economic outlook and high levels of inflation to preserve their wealth, by moving it into a more stable currency such as the dollar.

An example of this is Venezuela, whereby the hyper-inflation this year has reached 2296% at the time of writing. Therefore quick movement into a stable asset can be crucial as the money is devaluating every second.

Another use case is for the financial sector to move around digital currency internationally or between institutions for a cheaper and faster rate than conventional fiat currency.

Worldwide derivative markets are worth around 1 quadrillion dollars and are set for a world of disruption with the integration from...
Read more
DeFi Basics

With the current “tokenize everything” movement taking place within DeFi, we are seeing people take advantage of the ability to digitize...
Read more
- Advertisment -