Discussion With Jack Yeu, Co-Founder of Switcheo DEX on DeFi 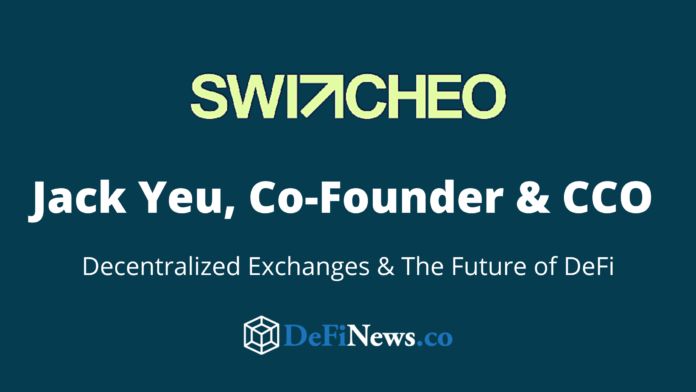 With disruption and innovation taking place at an accelerated pace, the development of DeFi and cryptocurrency has been moving forward consistently and progressively in new creative ways, to merge the gap between the utility of traditional finance and the benefits of decentralization.

There has been a collective effort from the exchanges, the cryptocurrency protocols and even the governments growing into the emerging technology (with their efforts on Central Bank Digital Currencies so they don’t become redundant).

This has aided in the advancement of the space towards real utility and integration of the technology into the real economy; a big step forward from the speculative asset class that cryptocurrency was, just a couple of years prior.

An exchange that has been unconventional and disruptive to the norm is Switcheo, which is the first multi-chain, decentralized exchange to trade ETH, EOS & NEO tokens, all from their non-custodian platform.

This is a huge step forward because users aren’t restricted to only trading ERC-20 tokens, which is generally the downside of trading tokens from a traditional DEX from the comfort of your ledger.

Today we have Jack, Co-Founder & Chief Commercial Officer of Switcheo for a discussion on Switcheo & his thoughts on DeFi.

Hi Jack a lot has happened since we last spoke! How has progress been so far?

“Hey Stel, great to reconnect – I think the last we spoke was when we first launched the NEO exchange!

We’ve been working on many exciting things over the past 2 years, such as launching on 2 blockchains (ETH and EOS), a new Switcheo Account system and atomic swaps between our supported blockchains to name a few of our previous exciting launches.

Switcheo TradeHub – our own native chain built to facilitate on chain order matching, which lets other projects build similar systems with an in built liquidity pooling mechanism.

Demex – an on chain derivatives exchange built on Switcheo TradeHub that lets users create and trade any CFD markets.

DeFi is definitely taking the market by storm. What’s your thoughts on the space?

“It seems like the current interest in Bitcoin and the DeFi space in general was driven by the Federal Reserve’s new repurchasing of corporate and government bonds, or essentially a “Fed put” on the traditional stock markets, driving stocks to new all time highs in a midst of a recession.

Bitcoin was designed specifically for this scenario (money printer goes brrr), and the performance of Bitcoin and the DeFi space in the upcoming few months would be testament on whether a decentralised currency/finance system would work.”

How have you thought about incorporating or contributing to the DeFi ecosystem?

“Yes, our current Switcheo Tradehub was designed to let developers contribute and build their own market systems. I think that we’re still in the early stages of DeFi adoption, where decentralised infrastructure products such as Switcheo TradeHub would be paramount in building the foundation for more complex products.”

What are you most looking forward to in the future?

“We’re currently seeing China move into digital currency adoption through DCEP, which is already being tested in a few cities. I think it would be a matter of time before other countries follow suit with either their own digital currency system or adopt something like Libra or even Bitcoin as a national standard for their currencies.”

Facebook
Twitter
Pinterest
WhatsApp
Previous articleThe Impact of DeFi on Ethereum, Regulation & The Crypto Ecosystem
Next articleDeFi Cryptocurrencies (With Tokens) That Coinbase Ventures Has Invested In